So the next Morning started with a stroll down to the bridge which is near by. It is a bridge over the backwaters of river Kali. One side of the bridge you can see the Arabian sea and the 4-5 islands that house some beach resorts. It is a lovely place to be at sunsets. (I always used to think that Narmada and Tapti are only two rivers that meet Arabian sea. Looks like there are numerous.) 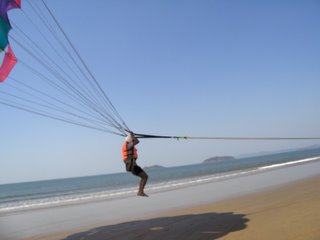 Karwar beach is nice and shallow, perfect for water sports and we were lucky enough that a water sports camp by The Adventurers was going on. So we did kayacking and parasailing without burning a hole in our pockets. It was a nice experience considering my frequent rants about flying but it ended a little too soon :).

Like last year, I managed to cook Gazar ka halwa on 26th evening this year also and took it on the trip. This used to be one of my favorite dishes back in the days of bliss. I don't know why but cooking it myself makes me feel very happy. It used to be such a event back then. Grating all the gaajars and then sitting for long hours, looking it getting cooked with the milk. Just before it will start getting dry, mom would take out half a glass of milk for us to drink and it tasted wonderful. I hardly ever made it till the end to eat it garam garam , falling asleep midway. And it used to be such an achievement whenever I was able to keep awake. Those small joys are so difficult to find now in this metropolitan, thousands of miles away from home where to see the moon on some odd day, I have to go out of the house and walk few steps. Cooking the halwa myself, brings all those memories back and perhaps makes up for that missing maa ka haath a little bit.

And as I tell everybody around me who wonder why I am taking so many pains when I can go out and buy some, I have made it my own way of celebrating republic day. I am not sure how long I would be able to continue it but I am trying :).

So back to karwar, everybody liked the halwa and we spent the rest of the day just lazing around in our room when suddenly at 6:15 I realized that sun would be going down in another 10-15 minutes. Me and nishit rushed to catch it and what a catch it proved to be. The whole landscape (seascape?), every changing scene just looked like one pulled out of art books of school (remember Almost Goa !! ?).

So back to karwar, everybody liked the halwa and we spent the rest of the day just lazing around in our room when suddenly at 6:15 I realized that sun would be going down in another 10-15 minutes. Me and nishit rushed to catch it and what a catch it proved to be. The whole landscape (seascape?), every changing scene just looked like one pulled out of art books of school (remember Almost Goa !! ?). 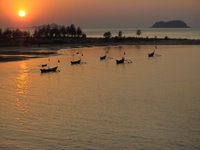 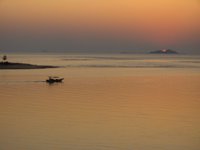 In the night we went back to the beach but it was too crowded on account of the Karavali festival going on there. Some performances were going on and even Udit Narayan was scheduled to perform on one of the days. But it didn't happen that day. Instead I watched a unique performance by T.S. Nevedita from Chennai. She neither plays any instrument nor does she sings. She, ladies and gentlemen, whistles. Now my understanding of classical music is zilch but it was a very सधा हुआ performance.

Next morning it was the journey back to Bangalore. The day however started with a rather unpleasant event that I would describe in the next post. Rest was as usual. (One unusual thing was that I took leaks in the open. Not that I am uncomfortable with that, but I consider it wrong but when nature calls, you better listen :-) ).

And thus it began ! (another year of travels)