Nilgiris : The Magicians I

May 14, 2005
I got a little distracted from the Nilgiri posts for a while but no more. So here it goes.

The trip to Ooty was memorable not only for the nice sceneries, beautiful places, and lovely climate but also because we met some of the most unforgettable people. Having come back to the daily routine and struggles of life, they even seem like a little unreal. But they are very much the people of this world who have learned to keep the balance between the ambition and satisfaction. This post talks about one such person named Antony Joseph, creator of thread garden. 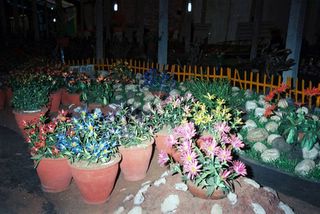 
Thread Garden is situated in an exhibition form right in front of the Ooty lake. It consists of over 300 varieties of plants in it, plants with lovely flowers, of all shapes and sizes. Not impressive you say? Well consider that none of those plants are real (you wouldn't guess yourself) but have been manually created by 50 crafts men over 12 years using threads !! Over 60 million meters length of threads have been used in this creation and you have to see it to believe it. You can read more about it at the above site. 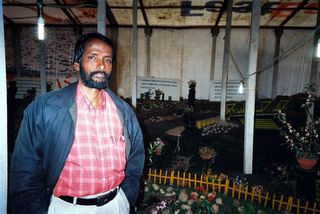 We met the man behind this effort, Antony Joseph and his passion for his creation is obvious. He happily explained us the details and answered all our questions and doubts. He calls his technique "Four Dimensional Handwound Embroidery" and on hearing that, the first thing that popped up in the top minds for Silicone Valley of India was ," Haven't you patented it?". To which he replied in a confident voice that there was no need for it since nobody now a days had enough patience to do such a thing. Some might call it an artist's arrogance which is no doubt present in everyone of them and without which probably they won't be such good artists anyway, but what I saw in that statement was the confidence that comes when you do something not for any other purpose but for the love of it. And you know that nobody without a love would be able to make that kind of sacrifice. 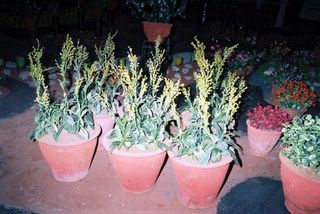 And the garden is not only just a artistic expression, it is also scientifically accurate. Every plant species that you see there, has been modelled after carefully study of a original sample and every little detail has been faithfully reproduced. He rightly said that it is the work of both an artist and a scientist. The two of them are never really far apart. Are they?

The whole effort is supported by Madurai Coats which provides all the threads for the garden. It was a nice experience watching the garden and talking to Antony. It is such people who inspire you to keep that dream of yours intact and keep working towards it relentlessly.